The final day! Thanks so much for getting me here! It's been amazing!

Favourite Thing: Protein characterisation. I engineer proteins from bacteria or viruses that are significant in diseases and haven’t been studied much yet. Then I can find out new information about them, relevant to new drugs and technology! And communicating science. All science. Cos science is awesome.

Me and my work

Understanding how proteins in bacteria and viruses function. I also make tests to detect them in dangerous and tricky to cure diseases!

I do a lot of things! I have a full-time job as a research biochemist. Over the last 4 years, I have helped to invent and develop a number of different tests for diseases like melioidosis (a bacterial disease in Australia and SE Asia that can kill over 50% of patients in 24 hrs), tuberculosis, influenza, dengue, malaria, and seafood allergies. All of these tests were developed using proteins engineered in our lab. We take DNA from bacteria or viruses that contain the code for important proteins we can take advantage of, and we fuse different sequences together to make new hybrid proteins that combine different functions, or change the way they behave. Then we can use these engineered devices to detect tiny amounts of protein from an infection in someone’s blood. 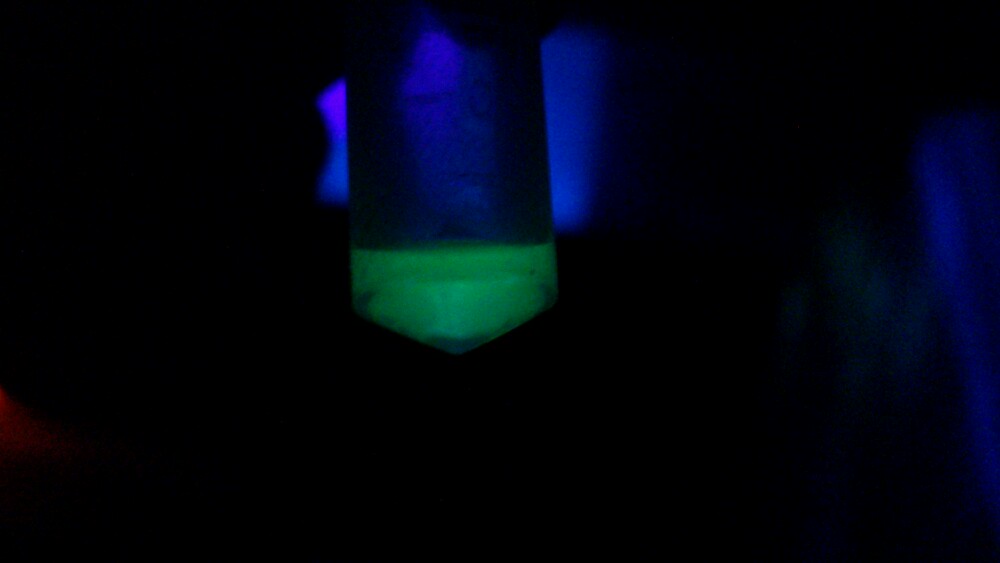 When we make the fusion protein, it has our interesting protein at one end, and glows because of the GFP stuck to it! Then, using a machine that scans the proteins with lasers of different light paths, we can actually see how the protein behaves and how stable it is in real-time, by heating it and watching it “unfold” (similar to the change where an egg white turns white when you cook it). We see changes in the amount of green fluorescence from the GFP attached to the protein when we add different things to the liquid the proteins are kept in. So we can find out what the protein does in the bacteria/virus, how it behaves, what makes it stronger, what makes it weaker etc. Then, we can use these qualities to design new drugs that we think might stop the protein working, and check using our machine if the protein “cooks” differently with the drugs! 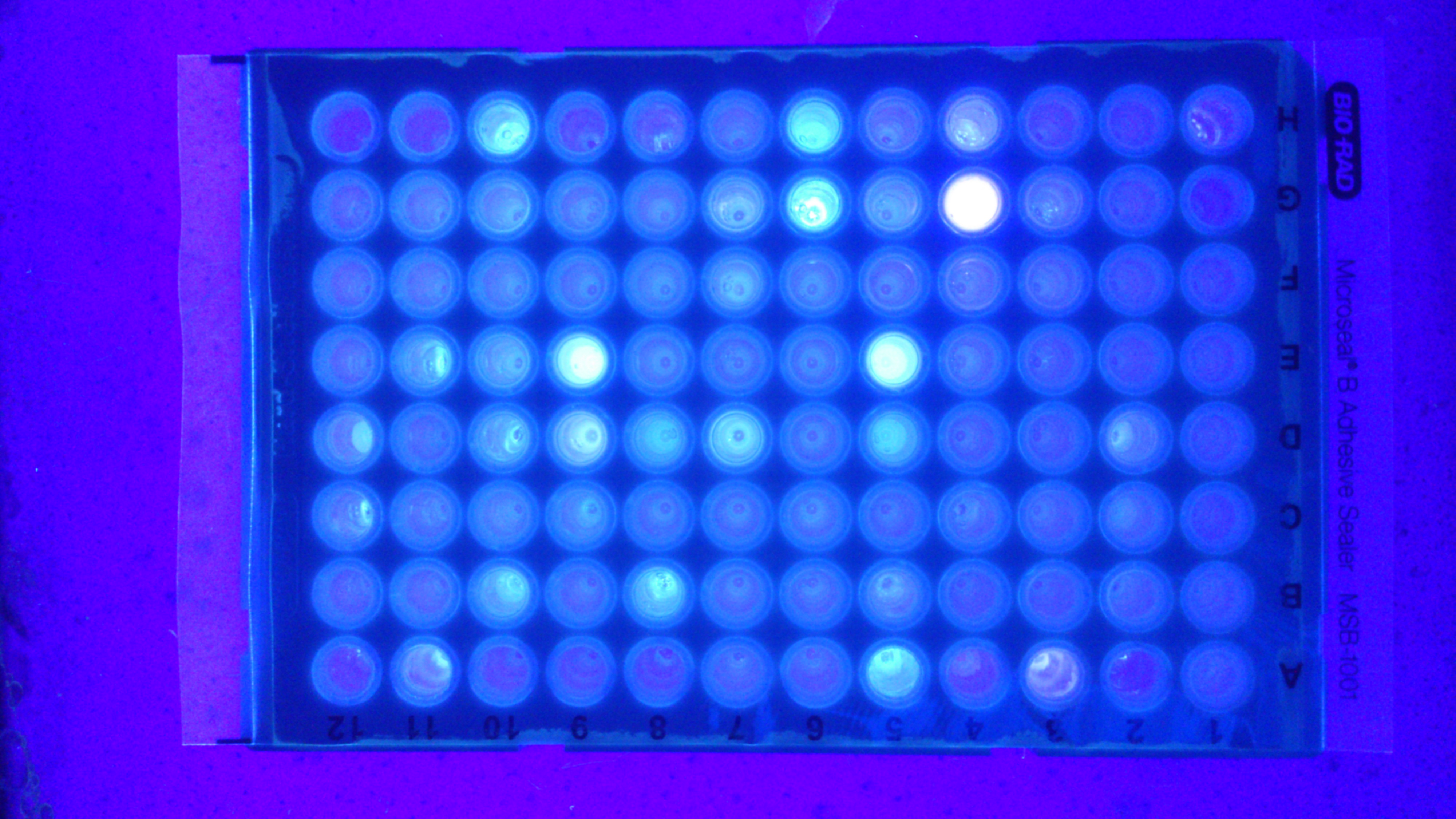 (one of the plates I screen for inhibitors of proteins; some of the compounds are fluorescent themselves!)

Lastly, I run a website, sciengage.com.au. I started this a couple of months ago. I am very passionate about communicating science and getting the message across the rest of the world about the awesome research being done! I wanted to write about this, but realised that there were already SO MANY people doing science writing so well on the web, why would I just be another person doing it? So instead, I have made a site that puts lots of the already awesome science sites (including some of the other scientists in this program!) in the one spot, along with awesome science on Instagram, Facebook, Twitter, Youtube, and crowdfunding sites. The aim of the site is to have everything in one place, so ANYONE can discover the science they like, and find new things online without having to search all over the web! It’s only new, but it is growing well, and there is lots more coming!

Sharing awesome science for sciengage, while juggling protein characterisation and drug discovery work in the lab.

Generally, I will run experiments to test new types of ways to change how proteins cook as I described above. I can run about 4 or 5 of these tests in a day, with up to 100 different types of changes to look at each test – lots of data to process (although it’s still exciting as you are doing things no one has ever done in history, every day!).  If I am not doing this, I may be cloning (fusing new bits of DNA together to investigate new proteins), managing the lab (another of my jobs) so it runs smoothly for all 7 of us working there, overseeing students’ work, writing papers, or maintaining the stock in our lab.

One of the best parts about being a scientist is sometimes you can just sit there for a couple of hours, and come up with new and amazing ideas! Lots of the time they don’t get to the stage of trying them out, but they always lead to bigger and better things one way or another!

On top of that, during my breaks and in my spare time I manage sciengage. This is actually pretty time-consuming, and I do it for the love – there’s no money there (yet, but here’s hoping!). I need to be active on social media like Twitter and Facebook, I need to be using my own site to find and talk about the latest science articles and writers around the world. 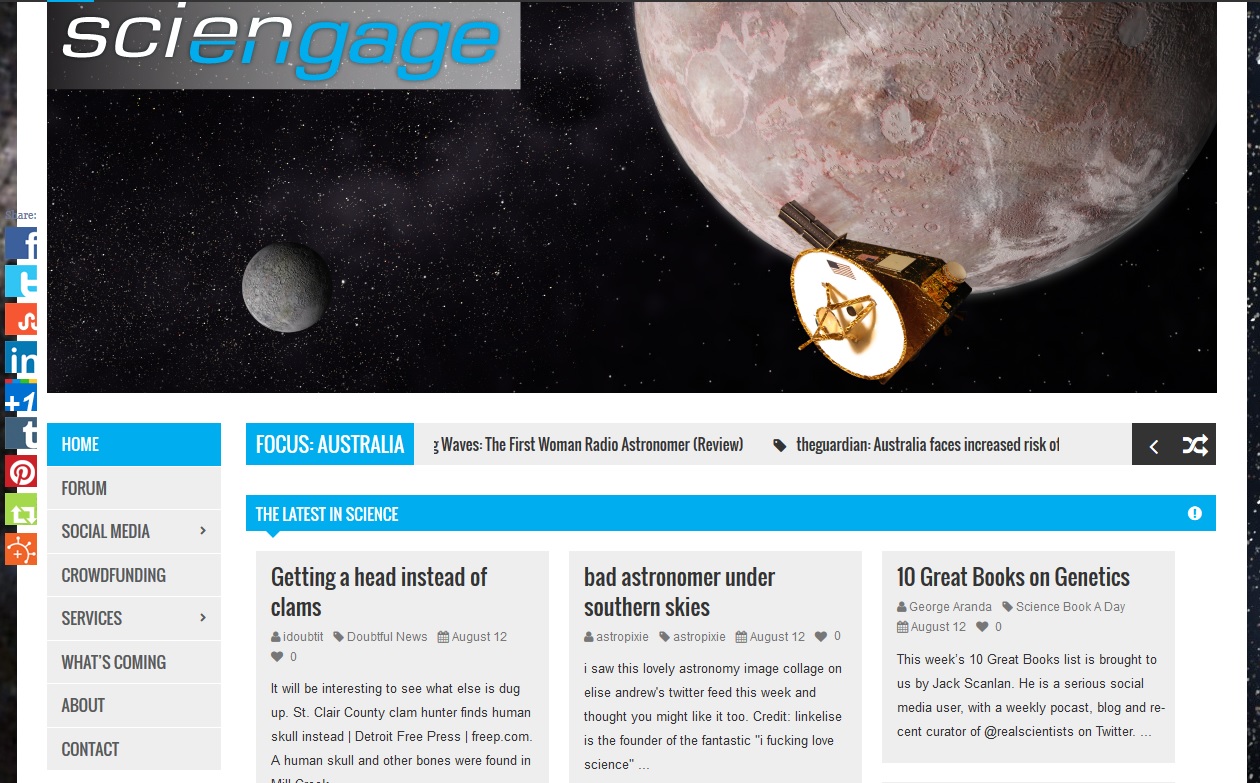 (sciengage in August – the images on the site and social media feature a different science artist/photographer every month!)

I have to be finding new YouTube science videos every day, and finding new hashtags and other things to feature on my site to make sure people are kept interested, and help them discover different things about science. It’s amazing what I have actually learnt myself doing this too. On top of this, I have to be constantly trying to find new sites and writers to add to my site, new artists to feature their work, and talk to people about opportunities to get the developments I want up and running in the near future.

What I'd do with the money

GoPros and sciengage! Read more below to find out!

There is an idea I had for sciengage that requires at least $1000 to make it feasible. I would love to be able to buy a few GoPros (for those who don’t know GoPro, they are action cameras attached to your body or a vehicle etc. for on-the-go photography and movies) and give them scientists. It’s one thing to read what scientists do, but it’s another to see it in real life.

Imagine watching a video from a marine biologist as he tags sharks in South Africa, with the camera attached to his head! Imagine being able to see ME designing and engineering new proteins for groundbreaking research. Imagine watching a video from a camera strapped to a paleontologist as they discover new dinosaur fossils in Outback AUS. THIS is what I want to develop. I want to pioneer this program, and feature the work of real scientists from all over the world so everyone can see the science that’s happening, right from the scientists, without it being edited and made to look different in a documentary or something.

No one has done this yet, and it would be an incredible view into the real world of scientists in different labs and industries.

How would you describe yourself in 3 words?

Who is your favourite singer or band?

What is the most fun thing you've done?

Scuba diving (do it often) and sky diving.

If you had 3 wishes for yourself what would they be? - be honest!

Own my own house outright, be a professional basketball player (need to grow about a foot!), make a multi-million dollar and global empire out of sciengage to pioneer bridging the science-public gap (not just sucking up here!)

What did you want to be after you left school?

Researcher (some sort of science, had no idea what) working out in the field, all over the world.

Were you ever in trouble in at school?

Yes; I was smart but VERY lazy and constantly in trouble for distracting other people.

What's the best thing you've done as a scientist?

Tell us a joke.

Why couldn’t the dog fit through the cat-flap? Cos he was riding a tractor!

Townsville Crocs/Chicago Bulls (even when they don’t win!), Cowboys, Reds